The Top 10 Reasons Why the Bible is Repulsive

People Who Have Actually Read the Entire Bible

Don’t forget, it’s atheists that are destroying the country and corrupting our youths….. *cough*

COLUMBIA, S.C. (CBS/AP) A Spartanburg County woman has been charged with felony animal cruelty, accused of hanging her nephew’s pit bull with an electrical cord and burning its body after the dog chewed on her Bible, authorities said Monday.

When questioned by police and animal control officers, Miriam Smith told them the female dog named “Diamond” was a “devil dog” and she feared it might harm neighborhood children, according to an incident report from the county’s Environmental Enforcement Department.

Smith, 65, was arrested Sunday and remains in the Spartanburg County jail. Bond had not been set.

She faces 180 days to five years in prison if convicted.

Authorities said the 1-year-old dog was kept outside on a chain and chewed the Bible that had been left on Smith’s porch. The dog’s remains were found under a pile of dried, cut grass. Part of the orange cord was still around the dog’s neck and a smell of kerosene still hung in the air, the animal control officer wrote in her report.

The dog was killed about two weeks ago when Smith’s nephew was forced to spend several days away from home because of winter weather in the area, authorities said.

Smith’s mental state will likely affect what kind of penalties she faces, Nelson added. He said he was stunned by how flat the woman’s emotions sounded as she recounted on tape what happened to the dog.

“She just acted like – what’s done has been done,” Nelson said.

Just because it’s fucked up to deny the right of a child to live doesn’t mean that your god thinks the same way. 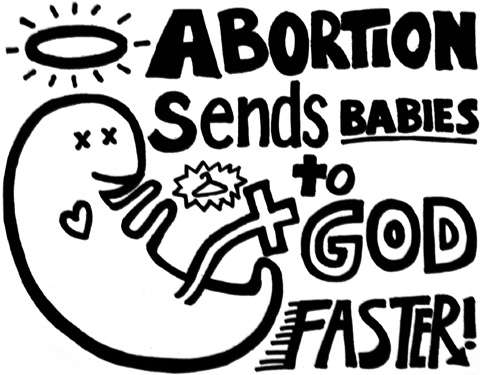 And then contradicts himself:

5 To the others He said in my hearing, “Go after him through the city and kill; do not let your eye spare, nor have any pity. 6 Utterly slay old and young men, maidens and little children and women; but do not come near anyone on whom is the mark; and begin at My sanctuary.” So they began with the elders who were before the temple. 7 Then He said to them, “Defile the temple, and fill the courts with the slain. Go out!” And they went out and killed in the city.

15 Everyone who is found will be thrust through,
And everyone who is captured will fall by the sword.
16 Their children also will be dashed to pieces before their eyes;
Their houses will be plundered
And their wives ravished.
17 “ Behold, I will stir up the Medes against them,
Who will not regard silver;
And as for gold, they will not delight in it.
18 Also their bows will dash the young men to pieces,
And they will have no pity on the fruit of the womb;
Their eye will not spare children.

2 Thus says the LORD of hosts: ‘I will punish Amalek for what he did to Israel, how he ambushed him on the way when he came up from Egypt. 3 Now go and attack Amalek, and utterly destroy all that they have, and do not spare them. But kill both man and woman, infant and nursing child, ox and sheep, camel and donkey.’”

16 Samaria is held guilty,
For she has rebelled against her God.
They shall fall by the sword,
Their infants shall be dashed in pieces,
And their women with child ripped open.

17 The priest shall take holy water in an earthen vessel, and take some of the dust that is on the floor of the tabernacle and put it into the water. 18 Then the priest shall stand the woman before the LORD, uncover the woman’s head, and put the offering for remembering in her hands, which is the grain offering of jealousy. And the priest shall have in his hand the bitter water that brings a curse. 19 And the priest shall put her under oath, and say to the woman, “If no man has lain with you, and if you have not gone astray to uncleanness while under your husband’s authority, be free from this bitter water that brings a curse. 20 But if you have gone astray while under your husband’s authority, and if you have defiled yourself and some man other than your husband has lain with you”— 21 then the priest shall put the woman under the oath of the curse, and he shall say to the woman—“the LORD make you a curse and an oath among your people, when the LORD makes your thigh rot and your belly swell;

And with all that said, why NOT help send the little ones to your sick, depraved god’s domain?

Just look at them…

HOW could you follow a god that ordered people to massacre these precious little things? Is this what a “loving” god would tolerate and allow to happen?

13Thou shalt not kill.

How nice… a bullshit campaign by the fuckheads at answersingenesis.org likening atheists to murderers. Why? Because apparently they don’t realize that murder is committed far more often by the religious, not atheists.

On the day of his swearing-in, Alabama Republican Gov. Robert J. Bentley  raised concern among the state’s non-Christians by declaring that people who had not accepted Jesus Christ were not his brothers and sisters.

Speaking to a large crowd Monday at Montgomery’s Dexter Avenue King Memorial Baptist Church — where the Rev. Martin Luther King Jr. once preached — Bentley said that “if you’re a Christian and you’re saved … it makes you and me brother and sister,” according to a report in the Birmingham News.

“Now I will have to say that, if we don’t have the same daddy, we’re not brothers and sisters,” he added, according to the paper. “So anybody here today who has not accepted Jesus Christ as their savior, I’m telling you, you’re not my brother and you’re not my sister, and I want to be your brother.”

By Tuesday, the comments were reverberating beyond Alabama. David Silverman, president of Cranford, N.J.-based American Atheists, called the remarks “outrageous.”

“He is a governor, not a mullah,” Silverman said. “This is a diverse nation with a secular government. If he doesn’t like it, he shouldn’t be governor.”

Bentley, 67, a retired dermatologist, had been sworn in earlier Monday, replacing two-term Republican Gov. Bob Riley. The new governor is a Sunday school teacher and deacon at Tuscaloosa’s First Baptist Church, which considers “passionately” evangelizing to be a “key core value,” according to its website.

During remarks on the steps of the state Capitol, Bentley declared himself “governor of all of Alabama — Democrat, Republican and independent, young and old, black and white, rich and poor.”

Those initial comments had been heartening to Ashfaq Taufique, president of the Birmingham Islamic Society. But the later comments, he said, were “quite disturbing and contrary to what I read earlier.”

“He was saying that for us to be considered equal, we would have to become Christians in his brand of understanding,” Taufique said. “I’m hoping that he was just in a Baptist church and he wanted to please his congregation, forgetting his earlier comment to be governor of all Alabamians.”

Richard Friedman, executive director of the Birmingham Jewish Federation, said such comments “tend to disenfranchise those of a different religious view.”

“You know, it’s a recurring theme in Alabama,” said Friedman, who said the state, with a population of about 4.7 million, is home to an estimated 10,000 Jews. “One of the things we have to do is continue to sensitize our leaders to the fact that there are non-Christians in this state, and encourage them whenever possible to be sensitive to that.”

Bentley was raised in Columbiana, a small town in rural Shelby County, the son of a sawmill worker. He was first elected to the Alabama state House of Representatives on a platform of fiscal conservatism and family values.

His staff did not return a phone call seeking comment Tuesday.

Gil McKee, senior pastor of Tuscaloosa’s First Baptist Church, said the new governor “was in no way meaning to be offensive to anyone.”

The Birmingham Jewish Federation announced Tuesday that it would assemble a delegation of Jews and Christians that would try to meet with the governor “as soon as possible to initiate a dialogue.”

Friedman, the longtime head of the federation, said the Jewish community was generally comfortable in the Southern state — but that such things happen from time to time, things he characterized as “only in Alabama” moments.

“These folks typically don’t mean any harm at all,” Friedman said. “It never occurs to them that they’re saying anything that would make others uncomfortable. They’re simply motivated by their passion for their own religious faith.”

Tenzen Deshek, a lama at the Losel Maitri Tibetan Buddhist Center in Birmingham, gave a good-natured chuckle Tuesday when asked whether he took offense at the comments. “You know,” Deshek said, “although he’s the governor, he can’t change people’s minds.”

Don’t you believe in flying saucers?

One person recently, goaded into desperation by the litany of unrelieved negation, burst out “Don’t you believe in anything?”
“Yes”, I said. “I believe in evidence. I believe in observation, measurement, and reasoning, confirmed by independent observers. I’ll believe anything, no matter how wild and ridiculous, if there is evidence for it. The wilder and more ridiculous something is, however, the firmer and more solid the evidence will have to be.”